Enbridge’s Line 5 carries up to 540,000 barrels per day of light crude oil, light synthetic crude oil and natural gas liquids. A 645-mile, 30-inch-diameter pipeline, it travels under the Straits of Mackinac for a distance of 4.5 miles. A busy shipping channel for fishing, transport and freight,  a recent incident near the pipeline due to anchor strike, ruptured a pair of power cables leaking 600 gallons of dielectric oil, while also denting Line 5.

Enbridge commissioned a report by independent Reliability Consultant C-FER Technologies that evaluated Vesper Marine’s Guardian:protect system and concluded that it is the most effective communication and warning technology, and would mitigate the risk of anchor strikes by 88.4%. 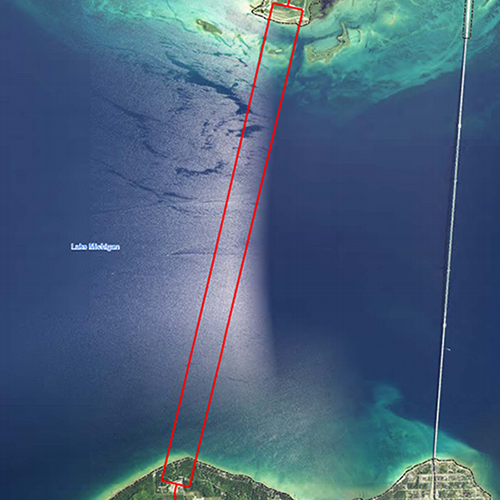 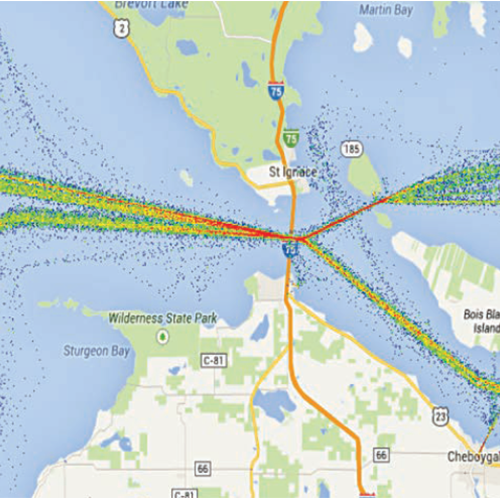 Shipping-traffic-density map shows traffic as it approaches the Mackinac Bridge and travels along the Straits shipping channel.

Built in 1953, Enbridge’s Line 5 Straits of Mackinac crossing has never experienced a leak in more than 60 years of operation.

The Straits are legally a “no anchor” zone and nautical charts warn against anchor drops in the area. Additionally, the American Transmission Company (ATC)  has large signs on each side of the Straits warning vessels not to anchor in the area.

To assess and report on measures that could be taken to mitigate the risk of anchor strikes in the Straits, Enbridge engaged Reliability Consultant C-FER Technologies. C-FER assessed the impact of communication and warning technology, Guardian from Vesper Marine to reduce the probability of an anchor coming into contact with Line 5 and causing a product release into the Straits. The key findings of C-FER Technologies were that the Guardian:protect implementation which sends both a warning message if a vessel is detected to be anchoring as well as an advisory message to all vessels approaching the Straits of a pipeline crossing ahead and the need for vessel operators to confirm that anchors are properly stowed results in an 89% reduction in the risk of anchor strikes.

Earlier, Enbridge had evaluated two marine AIS technologies to determine whether they could be used to actively monitor vessels in the Straits that come in close proximity to the dual Line 5 pipelines. While both systems offered the ability to identify, track and notify Enbridge personnel of vessels near the crossing of the dual pipelines, Enbridge ultimately determined that the functionality of Vesper Marine’s Guardian:protect system provides the most benefit to Enbridge in mitigating anchor strike risk. 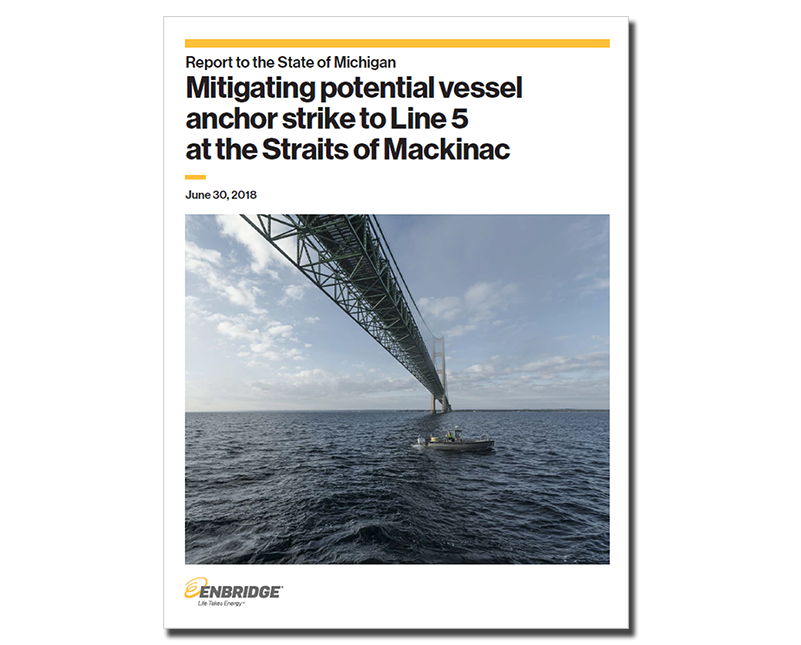